I’ve realized with this second pregnancy that my skin has given me more issues than before. Admittedly, I’ve got a lot of breakouts and I’ve noticed some blotches in my complexion. Whatever happened to the ‘pregnancy glow’ you’re supposed to get when expecting? I’m deeming it a myth since apparently it’s not working its way around here. 😉 Instead, I came up with this refreshing face mask for using a couple of times each week. I like it because it uses a zeolite powder and not normal clay so I get added detox benefits. It’s also the same zeolite powder I used in my toothpaste not long ago. 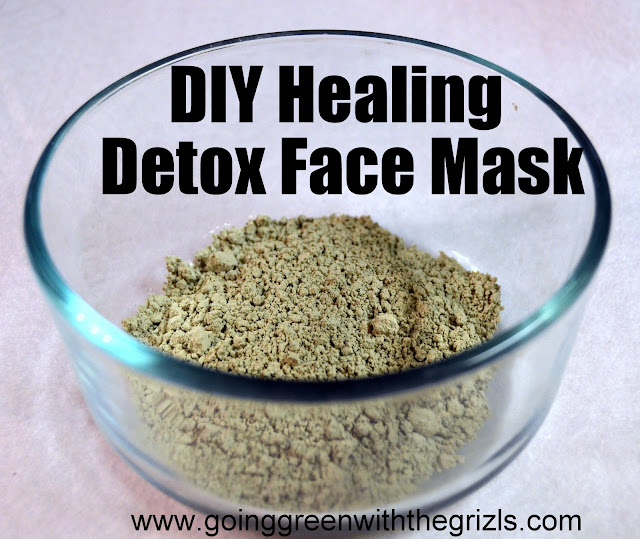 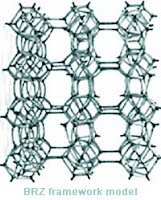 Zeolite is a naturally occurring, negatively charged product of sea water and hot magma. It’s unique porous, cage-like structure works to absorb unwanted positively charged ions and molecules and trap them. This structure is able to loosely hold molecules such as calcium, sodium, magnesium and potassium and exchange them when absorbing the undesirable molecules such as ammonia, heavy metals and cancer causing agents. Due to it being so great at absorbing and eliminating ammonia, zeolite is most widely used in laundry detergents.
Zeolite is also widely used as a soil amendment for its ability to increase water retention in the soil and allow plants to more easily access it. Unbelievably, it can hold up to 55% of its weight in water and slowly releases it to the plant as needed. Zeolite has also been used in water and air filtration, animal nutrition, and personal detoxification processes of the body. Since it is an absorbent, the granular form of zeolite is widely used for odor control such as in cat litter and absorbing unwanted spills such as oil in a machine shop.
Another easily researched use of zeolite was for the devastating occurrence at Chernobyl. In this accident, the radioactivity level was 30-40 times that of the atomic bomb dropped at Hiroshima and Nagasaki. Over 500,000 tons of zeolite were used to cover the area and help draw out radiation and toxins from the soil as well as being used as surrounding barriers to keep toxicity from leaching out into further land. Zeolite powder was even added directly to the water to help decontaminate it and make it safe for drinking. It was fed directly to livestock to draw out radioactive ions from meat and milks and baked into biscuits and other foods and given to the people, especially the children.

With all these great benefits I’m not surprised to have found that it’s also great for using in a face or body mask. You can go to almost any spa and get a mud mask of some sort and it’s a practice that people have been doing for centuries. In this application the zeolite is able to cleanse skin and help to remove impurities while calming redness and soothing irritated skin. Even as a fine powder, it could also be used as a gentle exfoliant by rubbing the mask in a circular motion on the face and then rinsed off instead of allowing to dry.

I don’t always use a mask so I like to make it on a single use basis rather than keep a jar of it around waiting to be used. 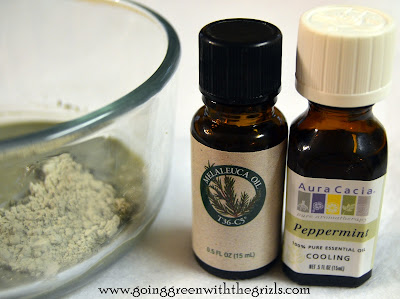 2 tablespoons zeolite powder
Small amounts of water
Peppermint and tea tree essential oils
I mix my water into the powder using small amounts at a time. I don’t want to end up with too much water because a super watery mask isn’t going to do much for your skin.
Since we are making enough for one use don’t go overboard with the oils. I used one drop of each.
Peppermint is known for soothing inflammation and being antibacterial so it works well for treating skin conditions as well as acne. It also provides a nice cooling effect. 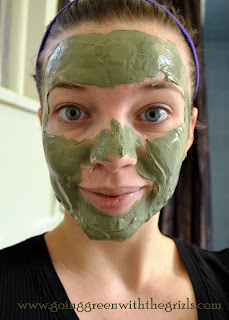 Tea tree oil has a wide array of uses and is commonly used to treat acne as well as used in many face washes and soaps. I love that these are natural and safe for pregnancy. 😉
Apply a thin layer on your face and upper neck. Mine is globbed on a little thick and probably took 10-15 minutes to dry. As it dries it will turn a white color and start to easily come off.
Rinse well using warm water. =)
If you find that it leaves your face feeling a bit dry, feel free to use a small amount of moisturizer.
So good your hubby may even ask for one, hahaha. 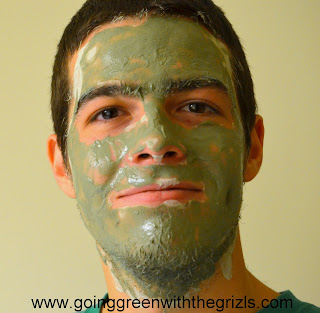